A Remnant of Bryson City’s Historic ‘Road to Somewhere’ 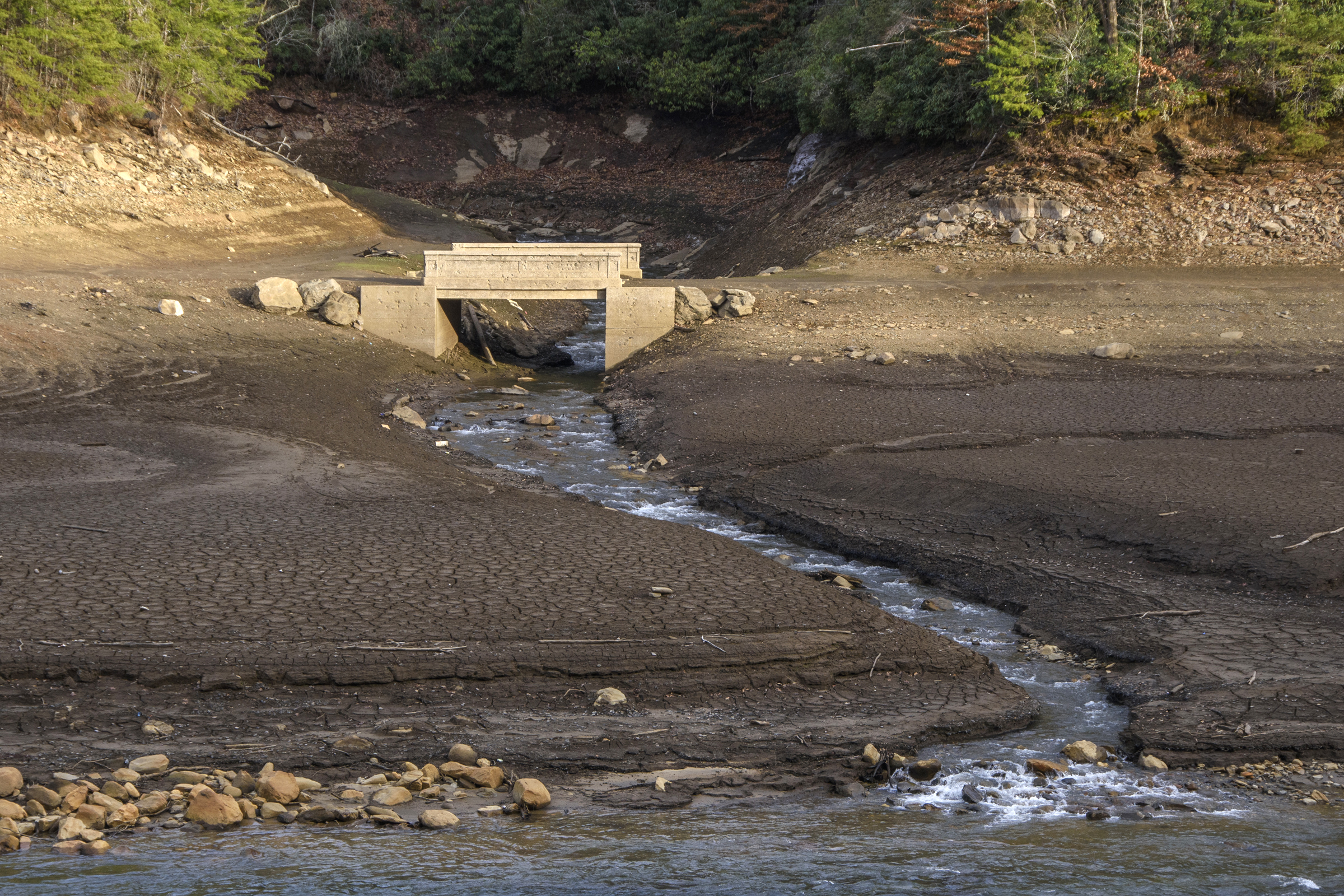 Years before Bryson City had its well-known ‘Road to Nowhere’, there was another road that really did go somewhere.

In the 1930s, NC 288 was the only road connecting Bryson City to Proctor, a lumber town in the western end of Swain County, and beyond. The road followed the Tuckasegee and Little Tennessee rivers for some 30 miles providing access to such communities as Fontana, Proctor, Noland, Forney, Bushnell and numerous family homesteads along the river.

(Above) Each Winter, when the Tennessee Valley Authority lowers the water level by more than sixty feet, Fontana Lake reveals some of its fascinating history, like the old Highway 288 bridge crossing Lands Creek just west of town. In the Summer, at full pool, the lake’s shoreline reaches the tree line at the top of the photo.

But in 1944, the creation of Fontana Lake had a devastating effect on those communities. To make way for progress, families were forced to sell their homes, farms and businesses and move elsewhere. Soon, everything that defined their lives disappeared under the rising waters of the 10,230-acre reservoir, including Highway 288.

A replacement road was promised but never completed, leaving a six-mile dead-end highway sarcastically known as “The Road to Nowhere”.

Read the fascinating Story Behind “The Road to Nowhere”

Not all of old 288 was lost to the lake. The westernmost 10 miles survived with a portion becoming part of the current NC 28 near Fontana Dam. And at Bryson City, the easternmost section of 288 follows the Tuckasegee River west for almost three miles before reaching the lake at the municipal boat ramp. Also, above Fontana’s north shore, other portions of old 288 still exist as hiking trails.

Each winter, the Tennessee Valley Authority lowers the lake level 50 to 60 feet for spring flood control and to perform routine maintenance on the dam. This annual drawdown exposes many remnants of the flooded communities including the concrete bridges along highway 288. One of those bridges spans Lands Creek, which flows out of the Great Smoky Mountains National Park just west of the municipal boat ramp.

The best times to visit the bridge are in early April, shortly after the Monteith Park boat ramp opens for the season, and again in late October and November when the lake level is low enough to walk 1000 feet along the shoreline to the bridge.

Even though Monteith Park is closed December thru March, you can also see the bridge any time throughout winter from the pull-off on Buckner Branch Road, across the river.

Bushnell, now under water, was one of the region’s larger towns in the 1930s. It boasted a sizeable population as a trading center and railroad freight center, with three stores and a boarding house. In total, more than 1000 people were displaced by the creation of Fontana Lake.

There’s a lot more to learn about Swain County’s history in Lance Holland’s two books, “Fontana: a Pocket History of Appalachia” and “The Nantahala River: A History and Guide”. Website

Every few weeks, you'll receive an email previewing our latest blog post and a link to the online story. We hope you'll enjoy our stories, but you can unsubscribe at any time.