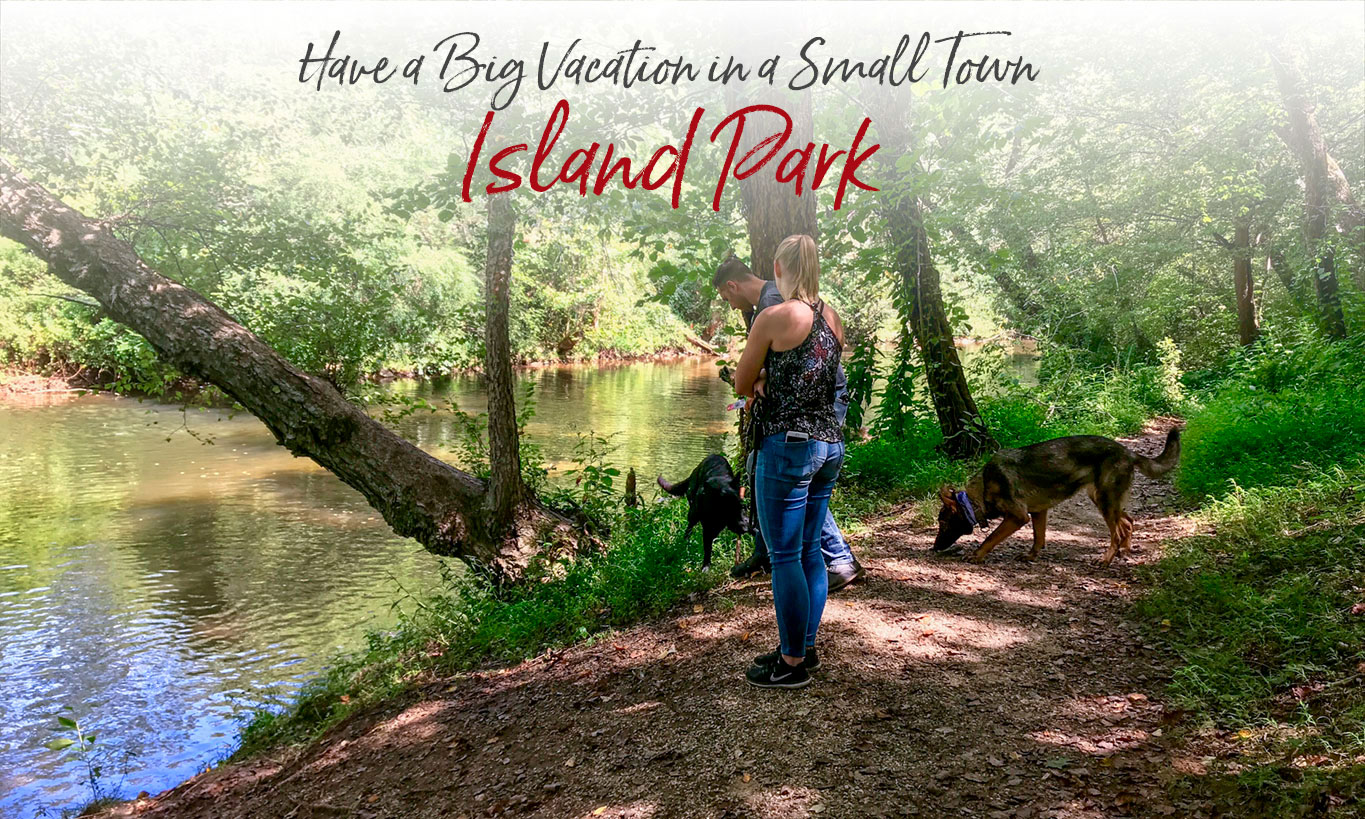 Only accessible by a foot bridge, Bryson City’s Island Park is cut off from the mainland by the Tuckasegee River that runs through the center of town. The park, just four short blocks from Everett Street, offers a secluded unspoiled landscape for fresh water anglers, picnickers, kayakers, tourists, hikers, bird watchers and nature enthusiasts.

Driving / Walking Directions
From Everett Street go east on Island Street (one way) along the Tuckasegee River. Just past the Appalachian Rivers Aquarium (0pening in the spring), the road/sidewalk turns north on to Ramseur Street. After one short block, go right on to Bryson Street. Island Park is straight ahead. To leave, go west on Bryson Street.

Near the picnic area, there are steps for launching kayaks and canoes to play in the water and enjoy the mid-stream rapids called ‘Devil’s Dip.’ This area and further up the island is also ideal for fly fishing in waders.

Island Park is pet friendly for leashed dogs. About a quarter of the 4.5-acre park is open and shaded with picnic tables, trash cans and dog waste stations. Please clean up after your dog. The rest is heavily wooded with roughly a half-mile of dirt trails that circle around the island and through its center.

Along your walk, near the center of the island, stands what may be Bryson City’s largest and oldest tree, a tulip poplar with a 20-foot circumference. At the eastern tip of Island Park, you’ll see the remnants of an old stone wall. And just a few yards upstream you can see the mouth of Deep Creek. 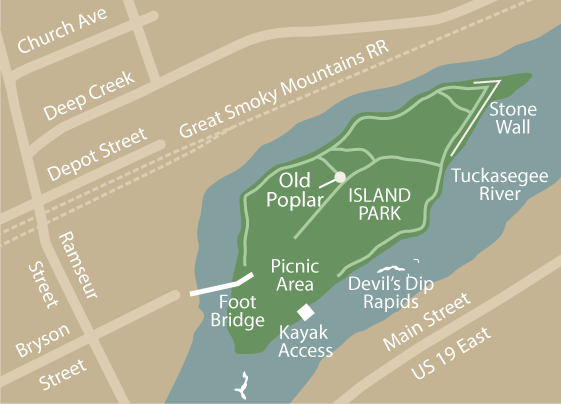 Bryson City’s Island Park
• Entrance located at intersection of Ramseur and Bryson streets
• Open daily from dawn to dusk
• Pet-friendly (dogs on leash)
• No alcohol
• No drugs
• No weapons
• No fireworks
• No admittance after dusk
• The park is patrolled by the Bryson City Police Department.
• There may be periodic closures throughout 2021 as flood damage cleanup continues

Fishing
Anglers enjoy the waters around the island park because of the wide variety of fish species found there, including brown trout, rainbow trout, brook trout, carp, river redhorse, small and large mouth bass, catfish, white bass, walleye, and rock bass. The park is within the 2.2 mile section of the Tuckasegee River that’s designated as Delayed Harvest Trout Waters, which means catch and release rules apply from October 1 until the first Saturday in June.  More about fishing in the Smokies.

Just outside the park, on Island Street, there’s a handicapped access fishing pier over the Tuckasegee.

History
For some local lore, read the story of ‘Ironfoot, the Hermit of Island Park.’

Dating back to its revitalization in the 1980s, Island Park has served as a recreational destination for tourists and locals alike. The trails were created by Bryson City resident R.T. (Buddy) Abbott, to whom the park is dedicated.

In 2004, the island was devastated by severe wind and flooding from Hurricane Katrina that left the island closed to the public for several years. Up until the year 2008, the island was only accessible by a swinging foot bridge, but due to years of weathering a new, fixed concrete bridge was erected in its place.

Bryson City. A River Runs Through It.

Some of the Tuckasegee’s best fishing is in the 2.2 mile downtown delayed harvest section.

About a quarter of the park is open and shady 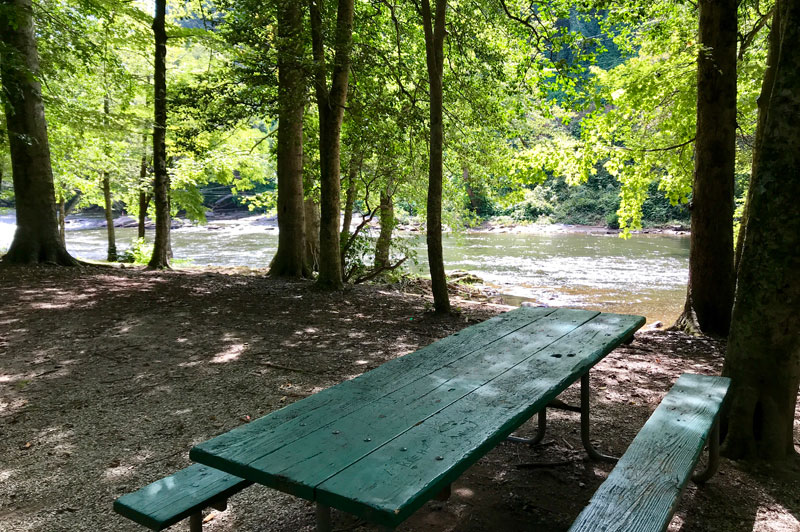 One of three riverside picnic tables 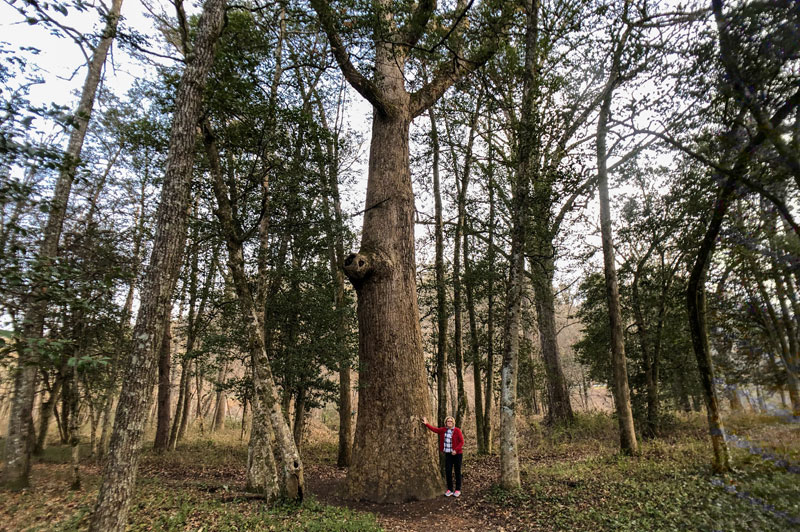 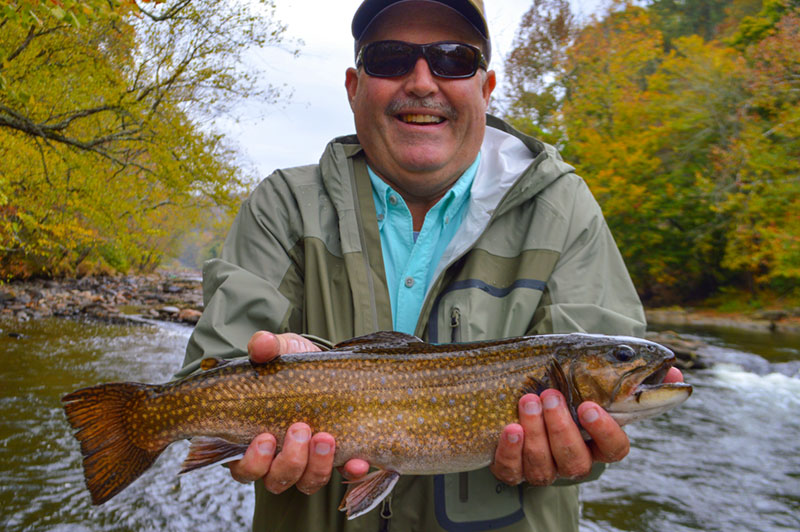 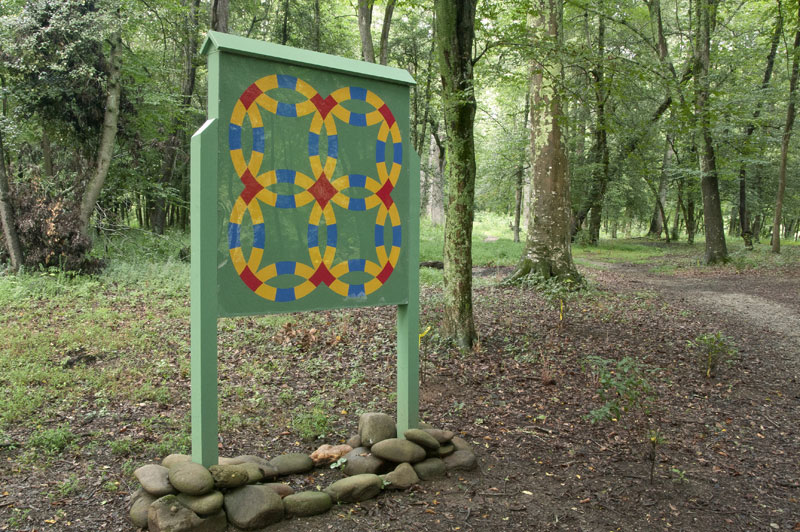 Island Park is on the Swain County Quilt Trail

Even among locals, the stone wall at the upper end of Island Park is somewhat of a mystery. Most mentions of the Island Park wall incorrectly refer to it as a ‘flood wall,’ but little more is mentioned.

With the wall protecting less than 20% of the island, Bryson City historian Don Casada says the wall was never intended to control flooding. It was a diversion wall. The sharp ‘V’ shape of the wall at the upper end of the island would have meant logs, particularly flood-borne timber or deadwood, would not have stacked up.

Casada explained that since the 1890s, a sawmill has been located immediately across the narrow channel separating the island from the town. Early on, the mill owners purchased land for logging in areas like Deep Creek and Kirkland Creek so that logs could be floated down the Tuckasegee to the sawmill.

To capture the floating logs, a boom would have been stretched across the Tuckasegee to divert logs into the narrow channel. And the sawmill would have had another boom installed across the channel to collect the logs, and a crane to lift the logs from the water up to the mill area.

The lumber mill may very well have constructed the wall. But it was more likely a project of the Works Project Administration (WPA) a depression-era work relief program. In a February 1939 article in the Asheville Citizen, Fred J. Cohn, Director of WPA Information Service for NC, noted “Bryson’s Island has been developed as a recreational center and a wall constructed to [sic] prevent flooding…”