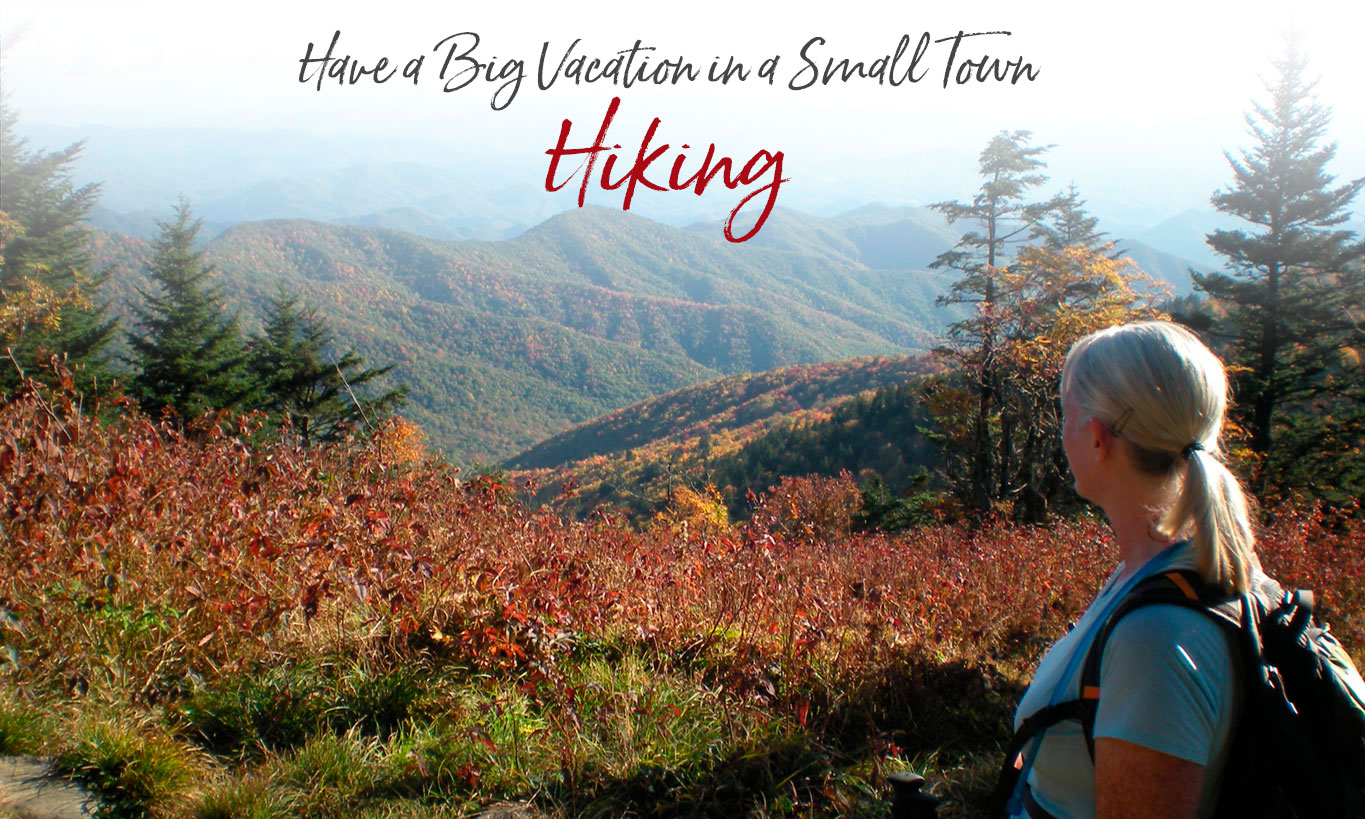 With More Than 800 Miles of Trails, the Smokies National Park is a Hiker’s Paradise

With 40 percent of the Great Smoky Mountains National Park in Swain County, many National Park trails are easily accessible from Bryson City. You’ll find a number of hiking trails in the Deep Creek area of the Park, just two miles north of town, and also off Lakeview Drive (the “Road to Nowhere”) six miles north of Bryson City. All Park trails map (pdf)

New: Parking Fees Beginning March 1, 2023, a parking tag will be required in the Great Smoky Mountains National Park. Three tag durations will be available for purchase for all vehicle sizes and types: Daily, $5; Weekly, $15; or Annual, $40. Parking tags may be purchased online, or on-site. Parking tags will NOT be required for motorists who pass through the area or who park for less than 15 minutes, or while parked at their designated campsite. Parking Info

Not all our trails are inside the park. There are many trails along the shores of Fontana Lake, land owned by either the Tennessee Valley Authority (TVA) or the U.S. Forest Service. The multi-use trail system at Tsali, famous among mountain bikers, is but one example. Tsali is 15 miles west of Bryson City off Highway 28.

Check out our “Think Outside the Gym” 2-day vacation itinerary that includes jogging in Deep Creek.

A Guide to Social Distancing on the Smokies’ Trails and Waters

With our “new normal,” how do we stay six feet apart from others on trails and while pursuing our favorite sports?

Trails in the GSMNP

Deep Creek Loop (Trails: Deep Creek to Loop Trail to Indian Creek and Back to Deep Creek) — 4 miles, easy to moderate. The trail is fairly level except for a one-mile section that crosses the 420-foot Sunkota Ridge (Loop Trail section). The trail passes by two nice waterfalls – Toms Branch Falls and Indian Creek Falls. (Download a printable PDF map of the Deep Creek trails and waterfalls.)

Deep Creek Trail to Newfound Gap Road — 14.2 miles, easy to strenuous. For most this is a one-way hike, requiring a second vehicle at the end of the trail. Many choose to walk this trail “down” from Newfound Gap Road.

Noland Divide Trail to Lonesome Pine Overlook — The 6.7 mile hike (in and out) is strenuous but the views are spectacular. The trailhead is just inside the Deep Creek park entrance, in the horse trailer parking area across from the Deep Creek campground. For the first three miles there’s an elevation gain of 2300 feet. At the crest of Beauregard Ridge the trail then narrows to a razorback with views of Bryson City, the Tuckasegee Valley and the Nantahala Mountains beyond.

For the more adventurous, the Noland Divide Trail connects Deep Creek with Clingmans Dome Road. 11.2 miles one way. This too is a one-way hike for most.

Noland Creek Trail — 6 miles in and out, easy. From a parking lot near the end of the Road to Nowhere, Noland Creek trail is an old service road with a gentle grade. Near the three-mile mark you’ll see the remnants of an old farm.

Through the tunnel at the end of the ‘Road to Nowhere’, there’s the 3-mile Goldmine Loop Trail and the 42-mile Lakeshore Trail, which crosses Forney Creek, Hazel Creek and Eagle Creek on its way to Fontana Dam.

‘A Walk in the Woods’ — the book and movie have stirred increased interest in the Appalachian Trail. The Bryson City area has six segments of the AT that are perfect for weekend hikers, plus another 40-mile, 3-4 day backpacking segment. More information.

The Appalachian Trail stretches through Swain County from south of the Nantahala Gorge; across Fontana Dam and then follows the highest ridges of the Great Smoky Mountains National Park past Clingmans Dome and Newfound Gap on its way to Maine. You can access the trail at Wesser in the Nantahala Gorge, Fontana Dam, Newfound Gap, and at Clingmans Dome.

A popular section of the AT is from Newfound Gap to Charlie’s Bunion. The 8-mile-round-trip hike passes through a spruce and fir forest with spectacular vistas. The hike as an elevation gain of 1640 feet and is considered strenuous.

Kephart Prong Trail — 4.2 miles in and out, the trailhead is on Newfound Gap Road (US 441) about 7 miles north of the Oconaluftee Visitor Center. With an elevation gain of 955 feet, the trail is considered moderate. In the first quarter mile, you’ll see remnants of the depression era Civilian Conservation Corps (CCC) camp. Most hikers turn around at mile 2.1 at the Kephart camping shelter.

Mingus Creek Trail — An in and out hike, 6 miles in length; easy to moderate with an elevation gain of 1515 feet. Trail begins at the Mingus Mill parking lot just north of the Oconaluftee Visitor Center. The lower two miles include Mingus Mill, remnants of CCC camp #4484, and if you take the right fork at Mile 1.25, an old road to a historic cemetery.

Self-Guided Nature Trails — The National Park has several self-guided nature trails in Swain County: The half-mile Spruce-Fir walk begins on Clingmans Dome Road and introduces you to the conifer forests that grow only on the high peaks this far south in the eastern U.S.  Smokemont — the 0.75 mile walk begins at Smokemont Campground and shows examples of human impact on the land, such as logging and farming. Balsam Mountain — the 0.75 mile walk begins at Balsam Mountain Campground and shows how nature has reclaimed a once-logged northern hardwood forest.

Want to hike with your dog?

Dogs are not allowed on the Deep Creek trails (even on a leash), but here are some pet-friendly alternative hikes.

Oconaluftee River Trail – One of two walking paths in the National Park where visitors can walk dogs and bicycle. (The other is the Gatlinburg trail.) Pets and bicycles are prohibited on all other park trails. The trail travels 1.5 miles one-way from the Oconaluftee Visitor Center’s Mountain Farm Museum to the outskirts of the city of Cherokee, NC. It is relatively flat, but does have a few small hills. The trail runs through the forest along side the Oconaluftee River and offers beautiful views of the river.

Island Park – In downtown Bryson City. Take Everett Street to Bryson Street. Cross the bridge over to the park at the end of Bryson Street.

Nantahala National Forest – Trails in the National Forest are pet friendly. One paved trail is the Nantahala River Bike Trail TR368. A nice flat trail that begins at the rafting launch site (Off Hwy 74, south of the NOC, turn left on Wayah Road). Park at the launch site and take the bridge across the river. The trail follows the river for about 1.5 miles.

Check out our Dog Friendly Vacation Ideas in Bryson City.

Blue Ridge Parkway
Quiet walks and hiking trails all along the Parkway. Local favorites are Waterrock Knob and Graveyard Fields.

Cataloochee
Take a break from watching the Elk herds and enjoy one of several hikes to see historic structures.

Wildflowers in the Smokies

From March thru September, each month presents new opportunities to view wildflowers in the Smokies. Looking for a particular variety? Our Smoky Mountains Wildflower Blooming Calendar (pdf) can help you plan your hike.

A Hiker’s Journal — Sharon McCarthy recently completed her goal of hiking every mile of trails on the Great Smoky Mountains National Park in just one year. She describes the experience in her excellent online journal. Lots of photos.